T'was the Tuesday Before Thanksgiving... 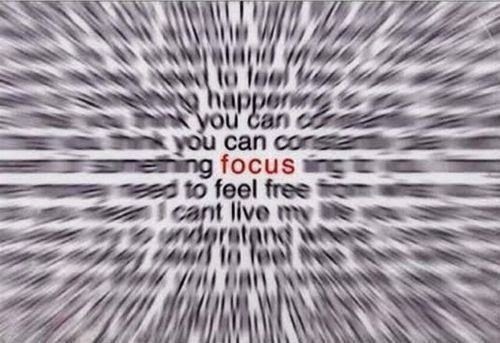 I have already pulled down two thousand words and I've only been writing for ninety minutes. Perhaps an impromptu blog post will help me direct my attention. I feel like I'm all over the place, kind of like Frank Caliendo. 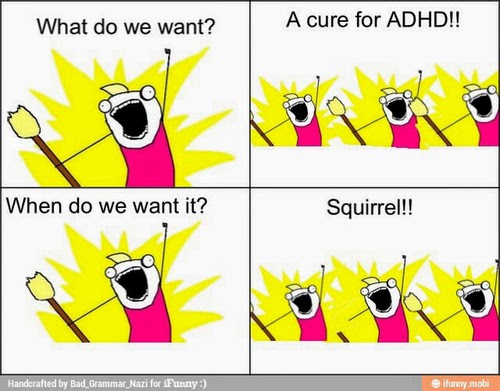 I dislike both parties. I just dislike the Republican party a little less.

Basically what I do is whinge about all of the acts of stupidity that go on in the political realm, and people like it, so it becomes a blog post. I'm not an equal opportunity complainer. I'm more of an affirmative action complainer. I affirm that I actively complain...a lot. (True story.)

I think Romney would have a been a fun president. I loved the jokes that circulated about him. That's one of the things I loved about George W. Bush, the jokes, and I liked the fact that he had a sense of humour about himself. I have to admit, Al Gore could take a joke too. As for the president we have now, do you know where we can return him?

I can only write about politics briefly. Then I start screaming and pulling my hair out. I say that, because I look at where this country is today, and I feel hopeless. The states do not make up a third world country. People who live in the United States of America should not feel hopeless. There is something seriously wrong with that, and nobody seems to care. I'm going to stop here before the tears begin to stream down my face.

I hate the weather. One day it's winter. The next day, it's spring. I've had two wasp sightings in my cottage, and I HATE IT! PICK A SEASON, PREFERABLY A COLD ONE THAT KILLS ALL MANNER OF FLYING, STINGING, BITING, CREEPING, CRAWLING, INSECTS! 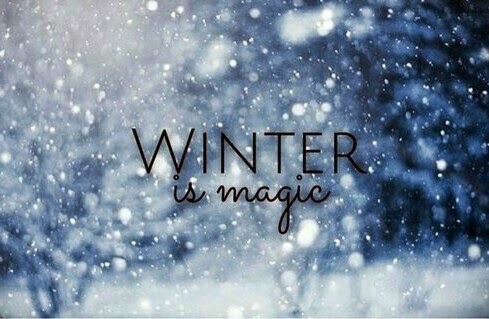 Because it kills insects! 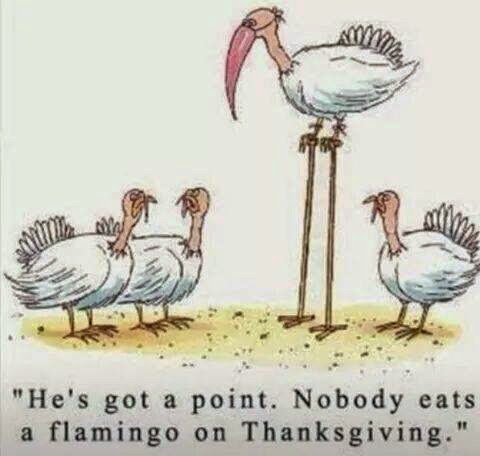 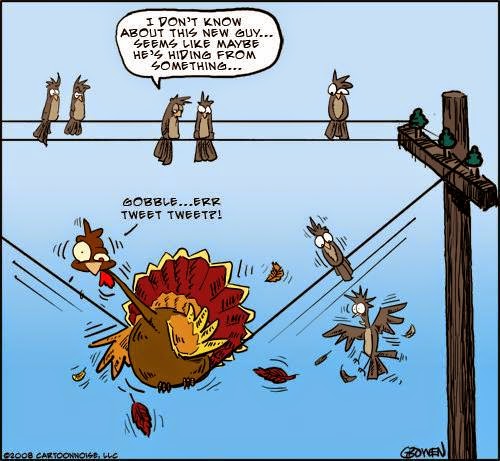 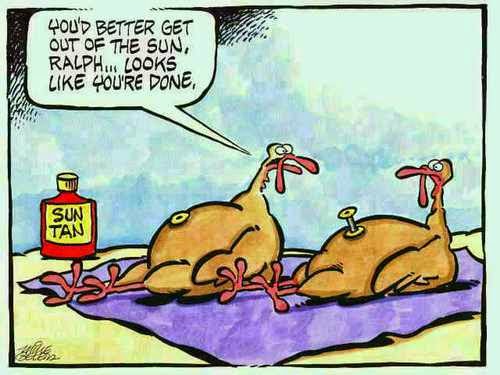 The holidays are literally around the corner. They seem to arrive at a faster rate each year. 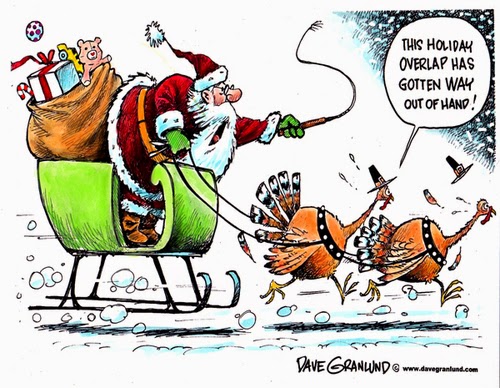 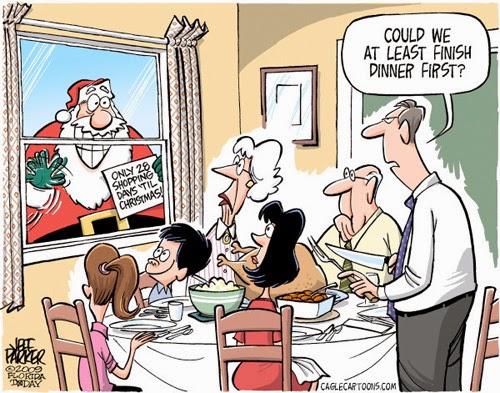 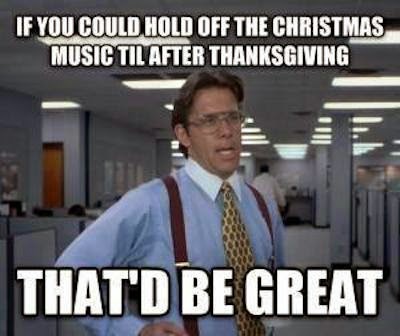 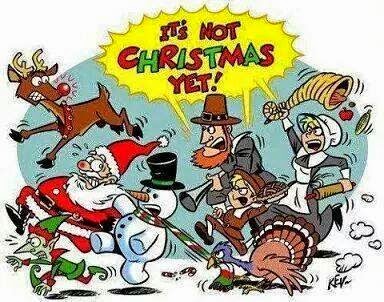 I'm not ready. I haven't been ready for them for the last two years, although I spent one Thanksgiving a friend's house, and that was so nice. I didn't have to worry about preparing everything. I brought some side dishes and some turkey. It was such a good time. 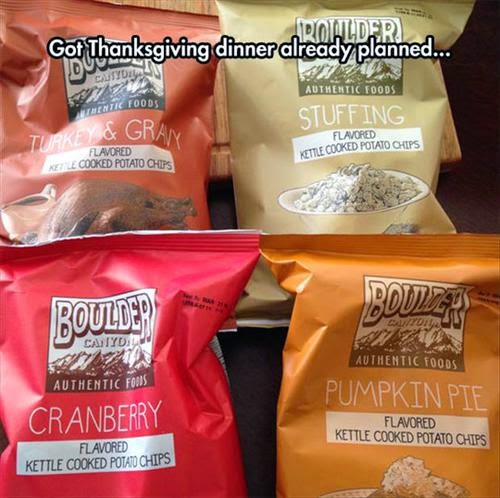 Perhaps this could work...


I know I'm asking for it. (I should really check myself before I wreck myself.) I'm a perfectionist, and perfectionists should not engage in any of the following:


*Does not include writing.

The worst part about preparing Thanksgiving dinner is the grocery shopping that is involved. I don't like to be out and about in the crowds. I do my best to avoid going anywhere after Thanksgiving unless it is absolutely necessary.

Do I really need a $5 sweater that was originally $20?

Is that really worth the possibility of getting trampled? 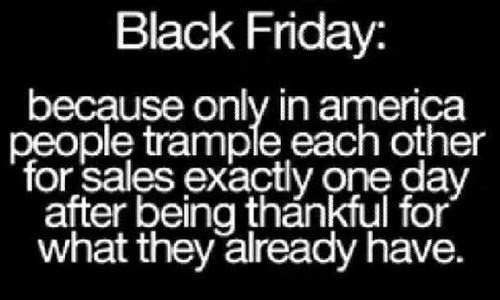 Do I really want to sit in traffic for five hours and wait in line for three hours just to purchase something I don't really need? NO!!!! If that's not your answer, well don't say I didn't warn you!

Besides it's a jungle out there, a germ infested jungle, and I've been sick for three, almost four weeks. I'm finally feeling better. If I get sick again, I'm seriously investing in a plastic bubble!!!! (I was so sick that I couldn't eat and I lost weight. My skinny jeans are hanging on me! I'm sure Thanksgiving dinner will take care of that.) 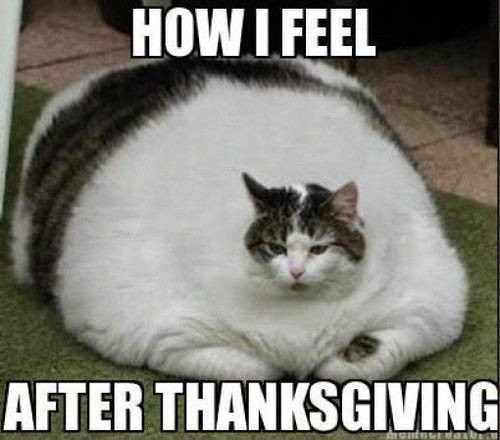 I will have holiday themed paper plates and plastic utensils. The cooking pans, serving dishes, and serving utensils alone will make a load of dishes, maybe two. I miss my last apartment only because it had a dishwasher.

If I still lived there, I'd now be in walking distance from one of my friends, but I love my cottage with its inspirational quotes on the walls. It's the perfect place for a writer.

Thanksgiving here typically is chaotic. Sure it starts out fun...

And then I start feeling the stress.

After my meltdown, dinner is served. Then we'll all lie around like beached whales in our respective food comas.

I don't feel any more focused than I was before. 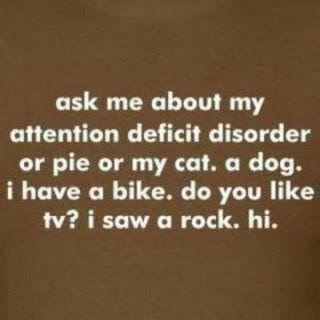 European techno from 2011 is not helping so I'm listening to nineties rap. Unfortunately this is causing a flood of memories to parade itself through my mind, so that's probably not helping my focus either. Still, I pulled down two thousand words, so that's good, but I can do better.

Perhaps I'll daydream about my fictional characters from the series, wishing they were real and crying because I'm a perfectly sane human being (contrary to popular belief) who understands that they will never be real flesh and blood people. They wouldn't like me in real life anyway.

I'm proof that writers are a strange breed. We vacilate between arrogance and self-loathing. I'm usually stuck on the self-loathing end of the spectrum. The middle would be nice. I could use a healthy dose of arrogance.

I'll leave on that note.

I wish everyone a safe, happy, and healthy Thanksgiving holiday filled with laughter among your loved ones. Remember that there's always something to be thankful for. We take so much for granted. If you have a job to go to, a home to go to, food to eat, and a bed to sleep in, you're truly blessed. It may not be the job you want, the home you want, or the food you want, but you should still be thankful. 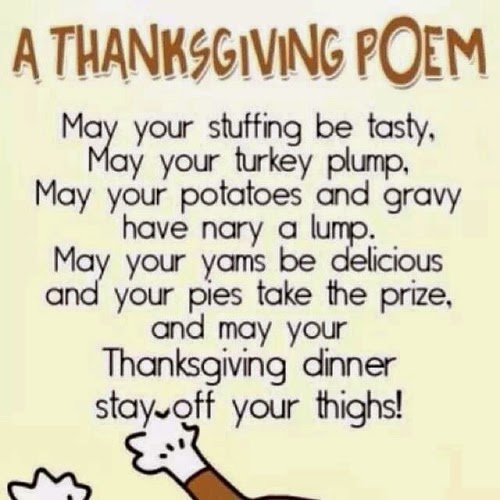 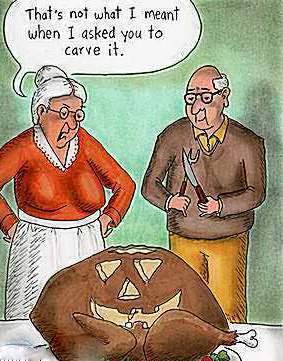 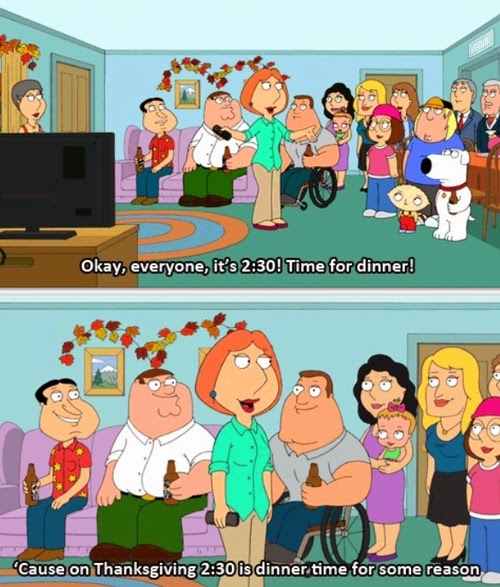 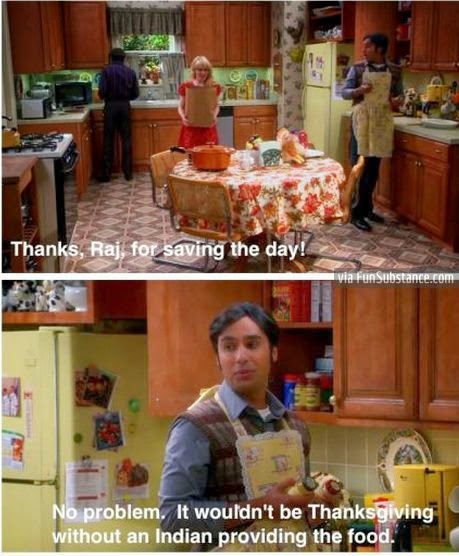 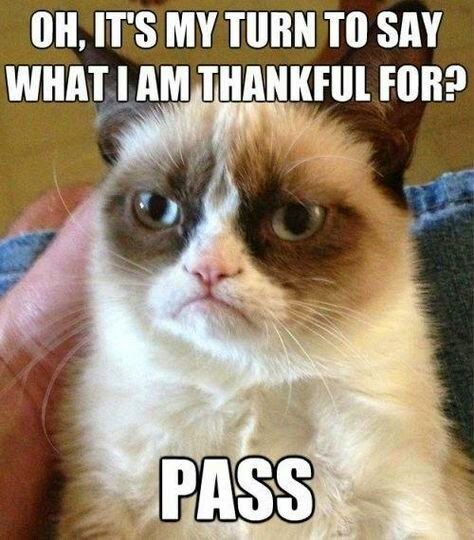 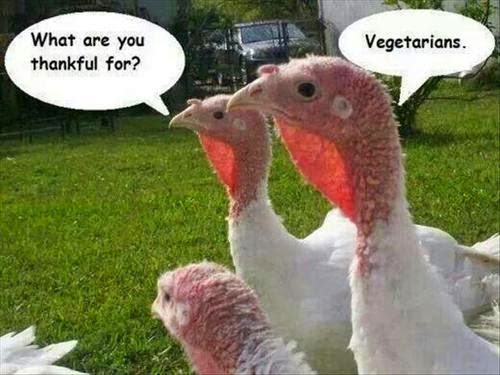 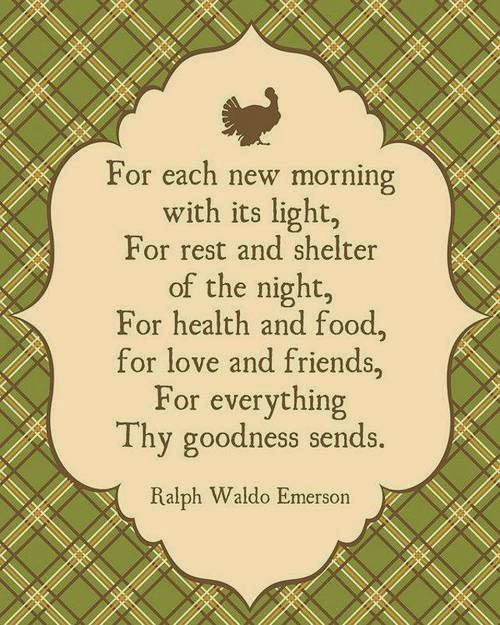 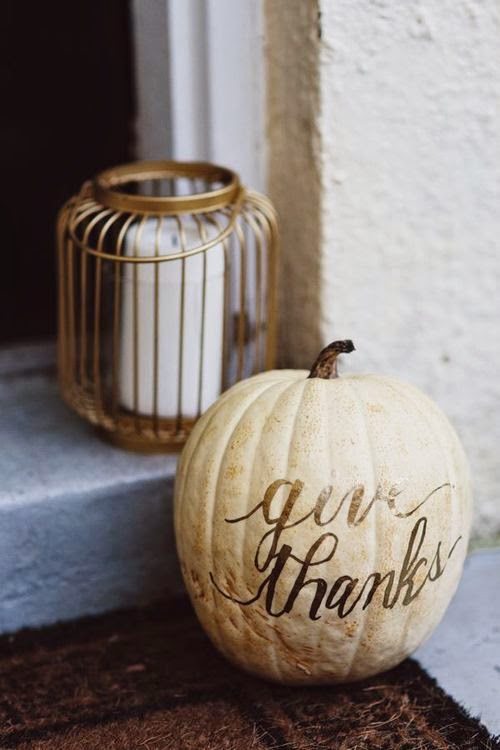 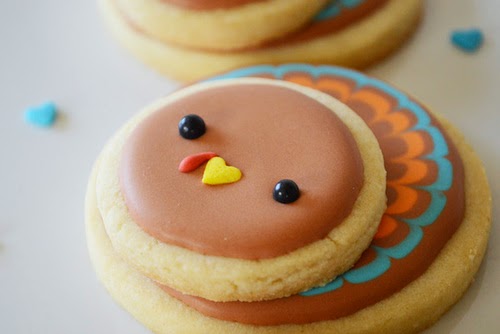 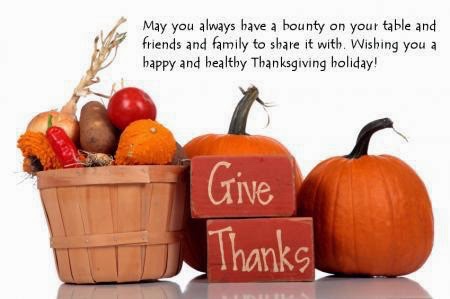